HomeMarketing5 Inquiries to Ask Your self Earlier than Launching a Digital Advocacy...
Marketing Digital advocacy efforts are vital for enabling nonprofit organizations to cut through the noise and win campaigns.

Without digital advocacy, it can be difficult to measure the success of your campaigns — or even know if you’re winning, at all. In fact, 94% of advocacy campaigners believe the opposing side is winning, and 86% believe they should embrace more impactful tactics.

It is time we step up our digital advocacy efforts.

Whether you’re a seasoned campaigner looking to go back to basics or are completely new to digital organizing and don’t know where to start — you’re in the right place.

5 Questions to Ask for a Successful Digital Advocacy Campaign

Before starting any digital campaign, it’s important to understand what you’re trying to achieve.

Think about what you want to accomplish. Do you want to turn the tides on a policy decision currently on the table? Do you want to help de-stigmatize an issue in your community? Do you want to mobilize your supporters to publicly support your issue ahead of an upcoming election?

Marshall Ganz is a scholar at Harvard and activist who has studied powerful movements and what led to their success. Through his research he found a framework for setting goals.

2. What is your theory of change?

It is incredibly important to show your supporters that their actions can have an enormous impact.

In our research report on Full Spectrum Engagement, we found that it’s essential to show how change is possible. Providing a blueprint for that path — and showing how you get from A to B — will help supporters understand the steps it takes to win, and they’ll directly see their role in that change.

Google’s research into civic engagement attitudes shows that those who do not take action are held back in part because they didn’t believe their actions would have an impact. When people see how their small action plays into a larger strategic plan, they will be more likely to join.

Here is how the #StopAdani illustrated their theory of change: 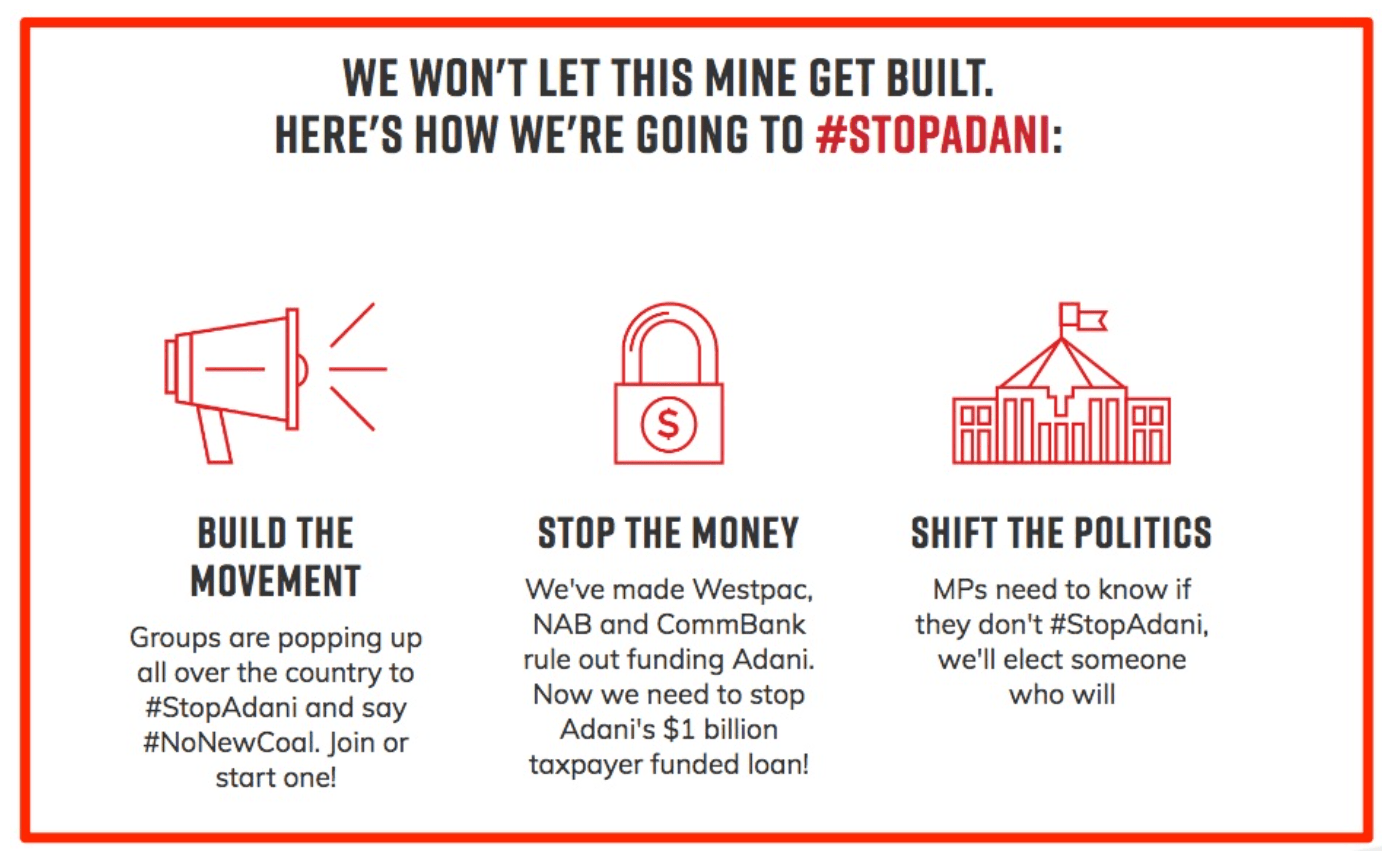 The giant #StopAdani campaign used this graphic to illustrate the theory of  change of their campaign to stop a new coal mine in Australia.

3. Who are your targets?

Now that you have a goal, ask yourself, who are the key decision-makers in charge of making your goal become a reality? Who do you need on your side to make it happen? A good exercise for narrowing in on decision-makers is called power mapping.

Here is an example of a power mapping brainstorm. The goal is in the pink sticky note, and all of the actors related to the goal are in yellow sticky notes and have been mapped: 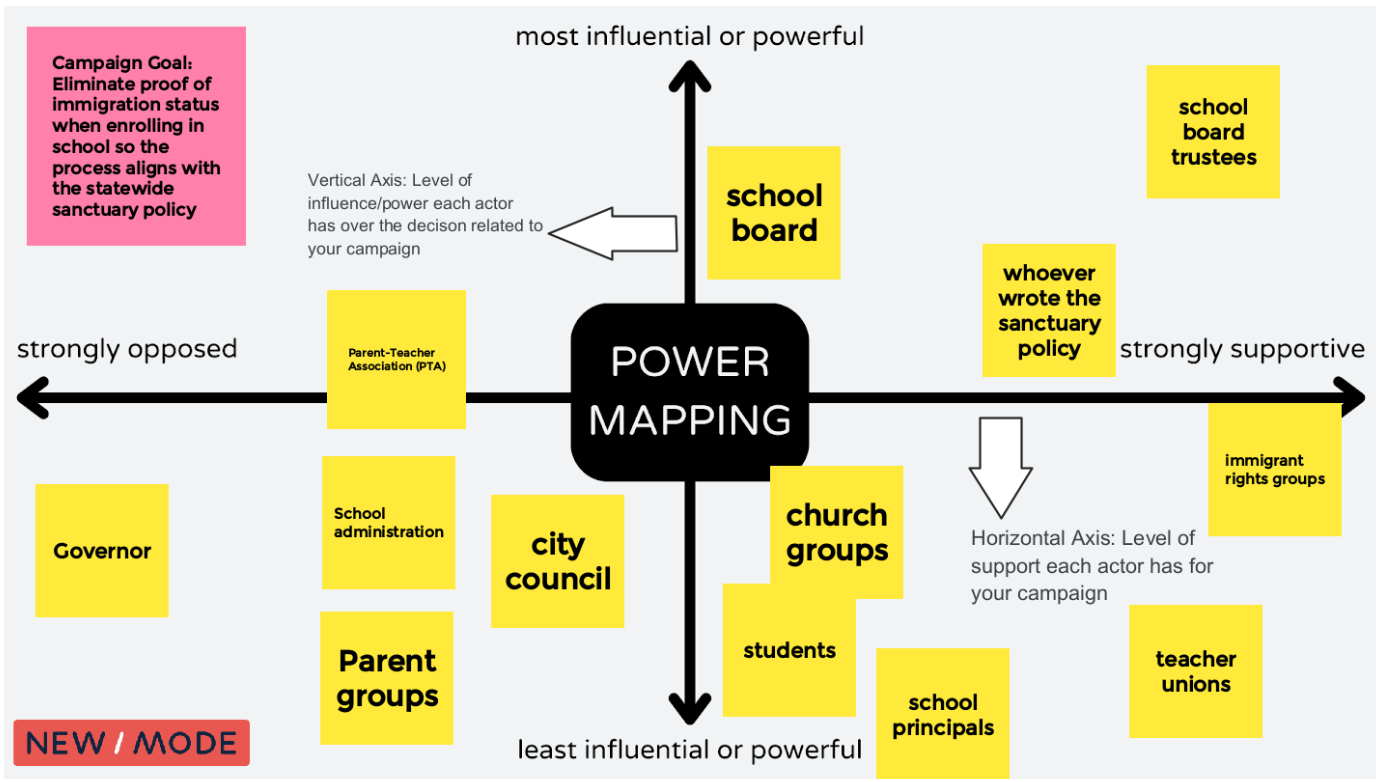 A Screenshot of a power mapping board. The campaign goal is to eliminate proof of immigration status when enrolling in school so they process aligns with the statewide sanctuary policy. The vertical axis maps the level of influence/power each actor has over the decision related to the campaign. The horizontal axis maps the level of support each actor has for your campaign. Template inspired by Anita Tang’s work at The Commons

To get more in depth instructions on power mapping please check out our Advocacy Targeting with Intention Manual to give you step-by-step instructions and great prompting questions for your brainstorming.

4. How will you reach your goal?

You have determined your goal and your theory of change … but how will you put this plan into action?

Reaching a CEO or a bank? Perhaps they would be more receptive to the public and a hashtag on Twitter calling them out.

Need to reach a local representative? They have staff dedicated to opening, reading, and responding to their constituents. New/Mode has built-in datasets that automatically match supporters with their elected officials so none of the manual work falls on your shoulders.

Check out the types of digital advocacy tools you can use to achieve your goals:

Use Tweets to build a powerful public narrative, grow support, and make your campaign go viral.

Learn how the Regional Transportation Authority used the tweet storm to win funding for transit.

Letters to the Editor

Make the headlines! Encourage supporters to write letters to local publications and provide a platform for your collective story… decision-makers will be sure to notice!

Learn how organizations such as the Warren Democrats, Stand Up America, and New Hampshire Democratic Party have used this great tool.

Input multiple email subject lines and messages into the system to increase deliverability and open rates. Create conditional messages that are dependent on the decision-maker’s current vote or position. Give your supporters an appropriate script for the given situation.

Learn how Defund the Police campaigns all over North

America used email actions to give their supporters a strong voice.

Call your local, state/provincial, and federal officials, and candidates and tell them what matters most.

Learn how BattleForTheNet used the call tool to advocate for open internet for all.

Give your supporters something to believe in! Provide an easy way for them to take action and get in touch with local decision-makers.

Learn how Safe Passage used a combination of the petition, tweet and letter to the editor tool to reunite families.

5. What is your follow-up plan?

Campaigning is a long and dedicated effort. In your digital advocacy campaign you are developing and furthering a relationship with both your supporters and decision-makers. You must have a plan for both of these relationships.

How to Nurture your Relationships with Supporters

You will have a list of supporters who take part in your advocacy campaign and you will have an opportunity to deepen your relationship with them.

Using New/Mode in tandem with a customer relationship management software is really effective to keep track of and nurture relationships. Once an action-taker uses New/Mode, their contact information will sync to HubSpot. In HubSpot you can see who has taken an action, and how many actions they’ve taken.

With this information you can start to follow-up with those people every couple of months and ask them to participate in an action they’re ready to take. For example, if someone starts with a low-barrier action such as a petition, you could ask them to do another simple action like sending an email to a representative or ask them to escalate their action and ask them to Tweet at their representative.

A helpful way to visualize this is a pyramid of engagement/ladder of engagement which is used by campaigners and organizers to define a series of tasks for supporters, usually escalating in difficulty or commitment required.

Different advocacy tools might be better depending on which level a supporter is at, as shown in this picture: 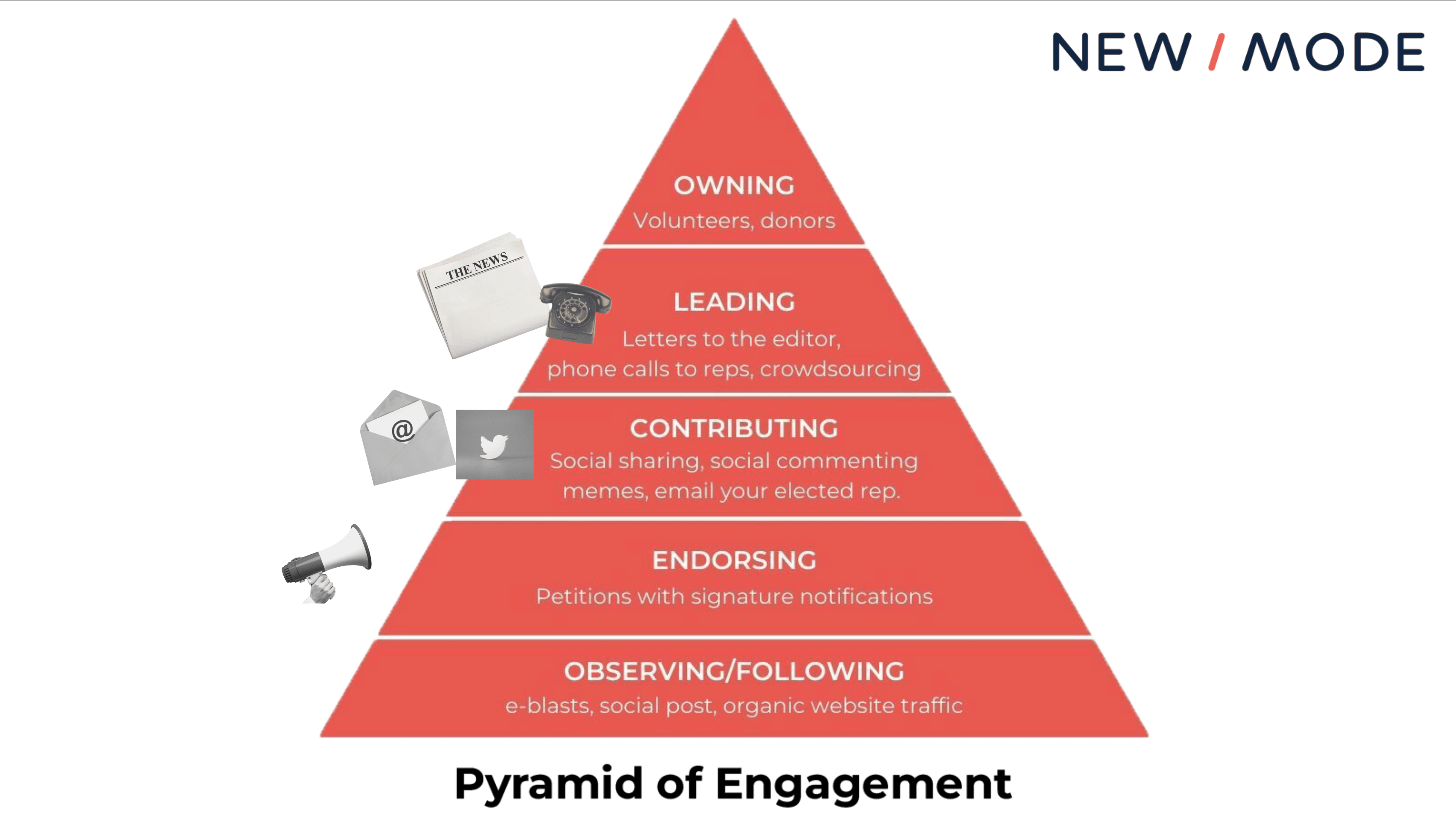 For more tips on how to engage your supporter base, check out this Campaign Engagement Checklist, developed from decades of experience leading advocacy campaigns across the globe.

How to Nurture your Relationship with Decision-Makers

Once your supporters contact their decision-makers you need to be ready to follow-up with them, make your ask again, and/or hold them accountable. You should ask supporters to notify you of the response they get so you can keep track of how receptive the decision-maker is.

Depending on how responsive the decision-maker is you may want to ask them for a meeting and invite supporters along so you can make your asks and demands face-to-face. If they’re not responsive, perhaps it’s time to try another communications channel if they are not receptive to the first request.

If they are not responding to emails, would they be more attentive if they saw their name in thousands of tweets or in the newspaper? If you do receive a commitment from a decision-maker, make note of this and come up with a plan to check in and hold them accountable.

Time to Get Started

You are officially set up for success because you now have a goal in mind, a plan to get there, targets to reach, a way to reach them and a plan to follow up on your efforts.

At New/Mode we are providing technology to help leading social good organizations cut through the noise and win campaigns. We provide digital advocacy software that is designed to turn engaged supporters into advocates that achieve tangible wins for our communities.

We support hundreds of cause-based organizations and so far have facilitated over 17,000 campaigns and 60 million civic messages to decision-makers with our software– we know what works and want to share the top five questions you should ask before launching your campaign to ensure you have a successful one.

The 11 Most Common & How to Find Your Style [Quiz]